Negotiating Restoration Policy and Outcomes in an Urban Environment 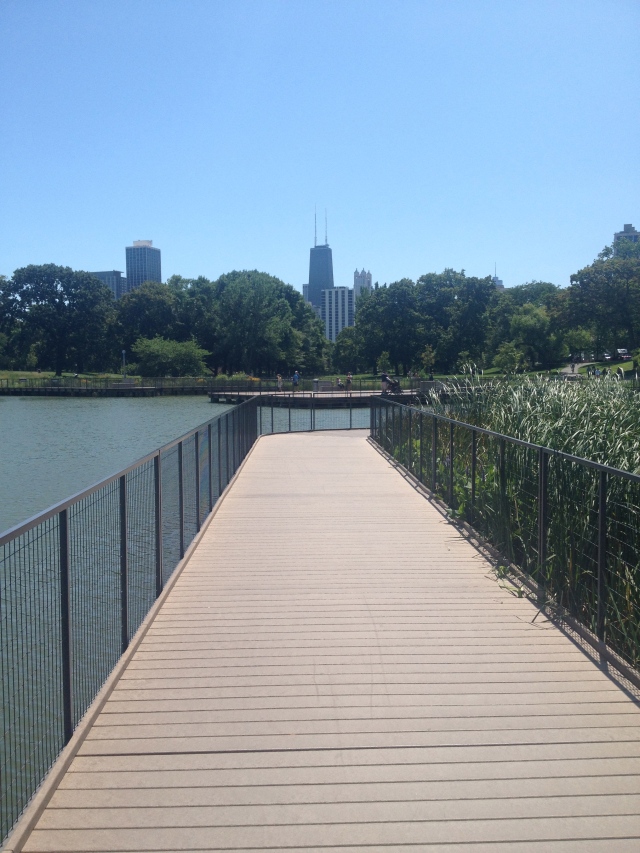 Especially in contested urban landscapes, land managers have learned that restoration is not a straightforward, step-by-step march from the restoration plan, through implementation and management to the finished product. Rather, it requires, from the outset of any negotiated restoration, that we engage with citizens and agencies, build public involvement, familiarize ourselves with the regulatory arena and research and understand the legacies of anthropogenic as well as natural processes. This is true even for restorations sponsored by a stable, nurturing, and science-based institutional environment such as a university.

Resilient restoration planning for an urban natural area requires that historical and ongoing anthropogenic influences be taken into account. Challenges in restoration planning include balancing priorities, responding to unpredictable shifts in climate and plant and animal communities, and managing different human interests. The unpredictability of relations between humans and natural areas means that part of the restoration and management process is not so much moving toward a set goal as it is a negotiation as we move toward positive restoration outcomes.  The way through this thicket of wicked problems[1] is by nature not clear, easy, or simple and the solution is unique to each restoration project.

A real life example comes from the University of Wisconsin-Madison Arboretum, widely viewed as the birthplace of ecological restoration, based upon its pioneering restoration work in the middle of the 20th Century.

The Challenge of Human (Anthropogenic) Impacts

The University of Wisconsin-Madison Arboretum practices restoration in an urban landscape rife with the impacts of human activities. Impacts include highways, above and below-ground utility lines, a radio tower with 12 miles of buried copper wire antenna, storm water ditches and detention ponds, to name a few. Arboretum land managers work with a mix of remnant, restored, and novel ecosystems, where even the restored and remnant communities contain new species and fundamentally altered ecological processes such as hydrology and fire.  In addition to the usual restoration challenges of balancing priorities, working with complex and dynamic systems, and climate shifts is added the complication of negotiating restoration policy, targets, and outcomes.

As a result of historic and current impacts from human activities, much of the University of Wisconsin-Arboretum is a novel ( Seastedt et al, 2008) and negotiated landscape (Ingram, 2010). In addition, its restoration management efforts must now be negotiated in a supercharged context involving research and outreach goals, neighbor relations, and regulations for storm water, smoke dispersal, air quality, and endangered species. Establishing, communicating, and achieving set restoration targets are a challenge.

The Challenge of Negotiating Restoration Targets

In this contested landscape, restoration (on both an individual project level and the overall Arboretum program) is a negotiation between City and University land use policies, Arboretum research and outreach goals, neighbor relations, differing user interests and citizen visions of the landscape, and City, state, and federal regulations for storm water management, air quality, prescribed fire smoke dispersal, and threatened and endangered species management. Science-based information is not always considered, let alone does it prevail in these negotiated settlements. See discussion in “Leopold’s Arboretum Needs Upstream Water Treatment to Restore Wetlands Downstream (Zedler, Doherty, and Rojas, 2014) for details of the Arboretum experience in negotiations about restoration policy, land use, and the use of science in decision-making.) 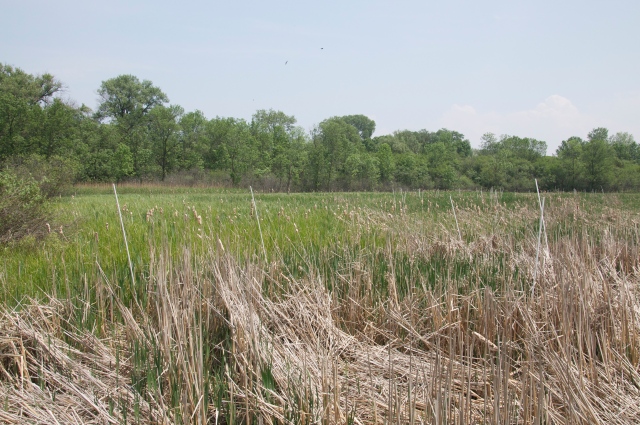 In pre-European settlement times, Southeast and Gardner Marshes were one continuous wetland on the eastern shores of Lake Wingra. (Restoration of Arboretum Wetlands, 2007). Over the course of the 20th century the marshes were ditched, filled, dredged and overwhelmed with urban runoff. Only a single narrow culvert connects the two marshes today. Water levels in the marsh are kept artificially stable. Dredge spoils, left in the marsh but not planted or seeded, provide sites for such invasive species as buckthorn (Rhamnus spp.), reed canary grass (Phalaris arundinacea) and cattail (Typha spp.), all of which thrive in the nutrient-rich storm water entering the marshes. 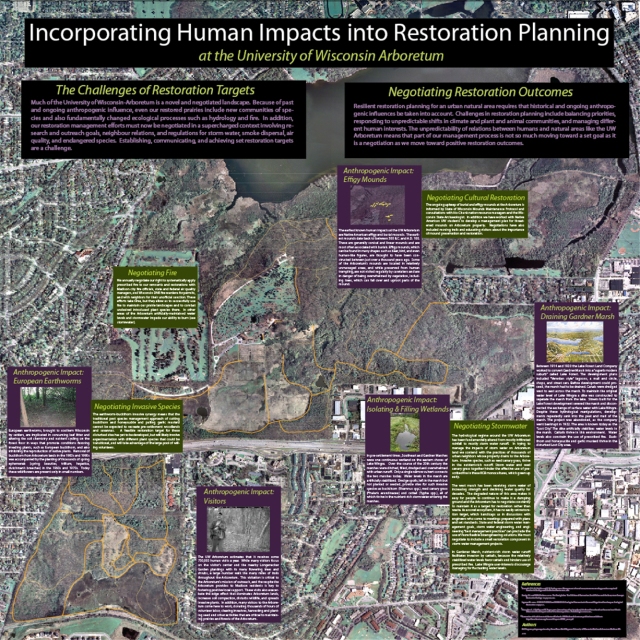 Incorporating the legacy of human impacts into Arboretum restoration planning.

Between 1914 and 1920 the Lake Forest Land Company worked to convert Gardner Marsh into a “superb modern suburb” called Lake Forest. The development plans included “Venetian style” lagoons, a mall and circle, shops, and streetcars. Before development could go ahead, the marsh had to be drained. Canals were dredged west to east across the marsh. To maintain the original water level of Lake Wingra a dike was constructed to separate the marsh from the lake. Streets built for the Lake Forest development severed the marsh and disconnected the exchange of surface water with Lake Wingra. Despite these hydrological manipulations, developments repeatedly sank into the peat and marl of the marsh. The project was abandoned, as the company went bankrupt in 1922. The area is known today as the “Lost City.” The dike artificially stabilizes water levels in the marsh. Cattails thrive in this environment.   Water levels also constrain the use of prescribed fire. Buckthorn and honeysuckle and garlic mustard thrive in the disturbed Lost City area. 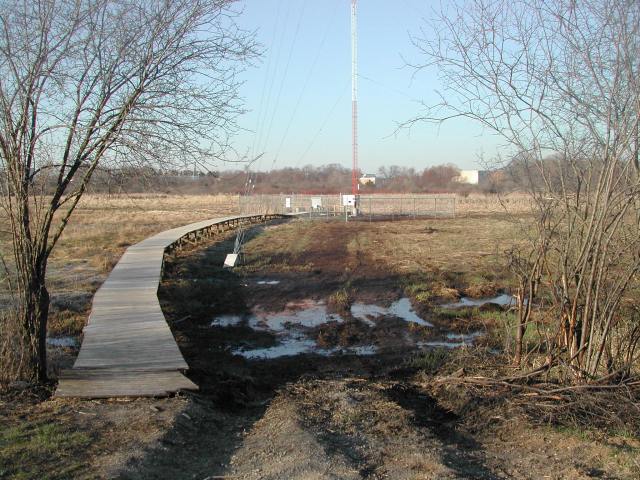 WHA Radio tower in the Arboretum’s SE Marsh.  Notice impact of construction equipment in the center of the photo.  Unseen is the 12 miles of buried copper wire used as an antenna for the radio tower.  Contaminants  from the copper wire may leach into contaminate wetlands and drinking water.

More recently the Arboretum has lost several negotiations over land use and restoration policy. These setbacks include City and University decisions about the way storm water will be managed on Arboretum land (in several instances restoration proposals were rejected as practical storm water management options in favor of traditional practice-based engineering).   The Arboretum also lost a negotiation over whether a radio tower and 6 miles of buried copper wire antenna should be retained in the Southeast Marsh. The radio tower was replaced near its original place and an additional 6 miles or copper wire were buried in the marsh.

Negotiations are weighted by large power and resource differentials between the parties.   In this super-charged and unpredictable atmosphere, establishing, communicating, and achieving specific restoration targets is a challenge—often, the best we can do is to move towards any positive restoration outcome. The Arboretum restoration case shows that we must view ecological restoration “not only as a technical task but also as a social and political project.” (Baker and Eckerberg, 2013). The realization that restoration planning and implementation operate in a political arena will not come as a surprise but we suggest, gives insight into the constraints of restoration and provides an expanded perspective on opportunities of the task.  Given that “restoration initiatives will typically encounter concerns about the purpose of a restoration initiative, about later use of a restored site, and about the extent of public access.” (Baker and Eckerberg, 2013) it requires that from the outset of any restoration we engage with citizens and agencies, build public involvement, familiarize ourselves with the regulatory arena and research and understand the legacies of anthropogenic as well as natural processes.

Even so, one might not achieve the desired restoration outcome because although people and agencies are willing to do so, nature does not negotiate.