Because restoration is done by humans and involves manipulation of the landscape, some scientists suggest that restoration ecology may be more a test of our understanding of mutually beneficial relations between humans and ecosystems than it is an “acid test” of our understanding of ecosystem functioning. If this is true–and I believe it is–then restorations–in addition to their ecological outcomes–make a great social and cultural contribution in that they give citizens not only the opportunity to reconnect with nature but also to build relationships with their civic community.

The neighborhood-based and community run restoration projects along Madison’s SW Bike Path make a strong case for the social, cultural, and ecological benefits of restoration projects.  The small prairie plantings strung along the SW Bike Path which were burned in the past couple of weeks are conceived, planned, implemented, and managed by neighborhood associations and citizens groups.   To get the restorations done, these civic groups have built partnerships with public and private agencies, received funding and in-kind donations from granting agencies, educated fellow citizens, and provided opportunities for socializing and outdoor experiences.  This is no minor accomplishment.

A great restoration tool for civic engagement is a prairie management fire in a public space like the SW Bike Path.  For example,  a prescribed management burn of the Dudgeon-Monroe Prairie (aka Sue’s Prairie) was conducted Friday evening April 18 by a burn crew of citizen volunteers from the Westmorland, Dudgeon-Monroe and Nakoma neighborhoods on Madison’s west side.   In what has become a spring ritual along the SW Commuter Bike Path, the fire was led by burn boss Bonnie McMullin-Lawton under a permit issued by the City of Madison Fire Department.

The prairie fire was like a piece of ephemeral performance art–the burn was done in about an hour but during that time dozens of neighborhood residents stood at a safe distance and watched as the burn boss and drip torch man orchestrated the safe and efficient flow of flame over the remains of last years prairie plants.  Hundreds of other people observed the burn as they passed by in cars or on bikes. 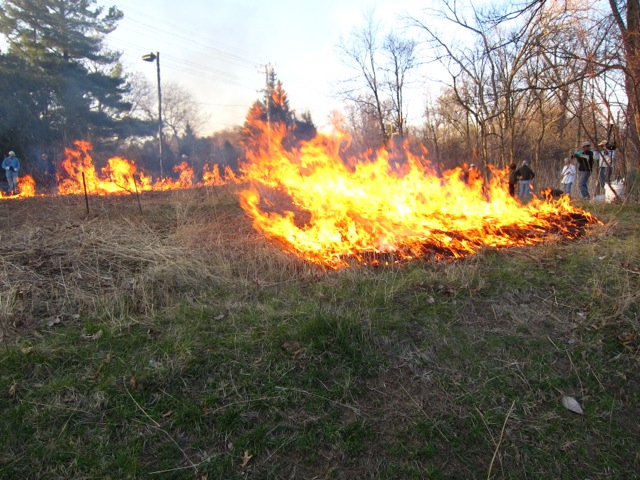 View from the south-west corner of the prairie.  Photo by Susan Slapnick.

Planning and conducting a prairie burn is no simple matter, requiring considerable technical knowledge of fire behavior and prescribed fire techniques; in addition, burn bosses must be aware of safety issues, and have communication and community organizing skills.

The Dudgon-Monroe Prairie.  The art of prescribed fire. Photo by Susan Slapnick.

Mop-up time and looking for the embers. Photo by Susan Slapnick.

Why Use Fire to Manage Prairies?

Fire is one of the most widespread of natural phenomena and is an essential natural disturbance that shapes the structure and function of fire-tolerant or fire-dependent plant communities such as grasslands and savannas, and some open oak woodlands.

Fire has long been used as a conservation tool and since the late 1940’s as a restoration tool.  The main uses of fire in restoration vegetation management are to restore fire cycles to communities whose composition and structure are maintained by periodic fire, and to control some pest species.  It was at the UW-Madison Arboretum, in fact, that periodic fire was discovered to be essential to maintaining restored prairie.   The first prescribed management fire at the Arboretum was conducted in 1951 when a section of the relatively new Curtis Prairie was burned.

A prescribed praire management burn was conducted on Tuesday April 22, 2014 in the Westmorland Neighborhood’s prairie ravine near Glenway and the bike path.  This site is across Glenway Street from the Glenway Prairie that was burned a week or so earlier.

The Westmorland burn was led by Bonnie McMullin-Lawton and Jack Lawton and like the Dudgeon-Monroe Prairie burn, attracted a contingent of neighbors fascinated by the flames and the process. 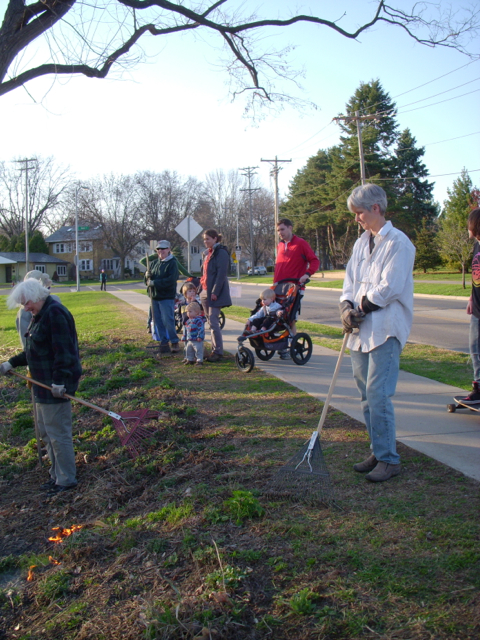 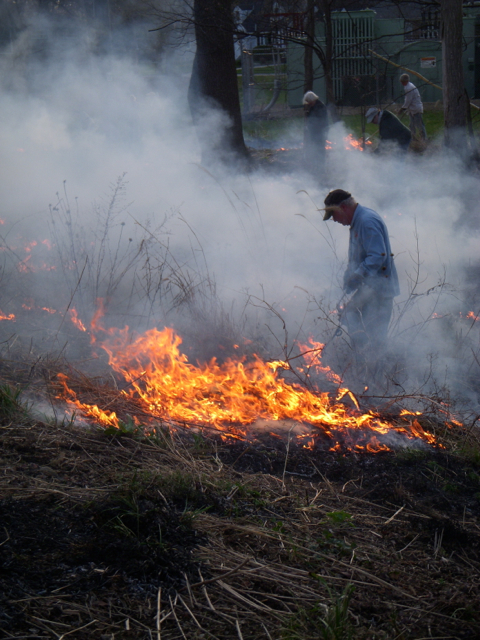 In the thick of it.  Photo by Sandy Stark. 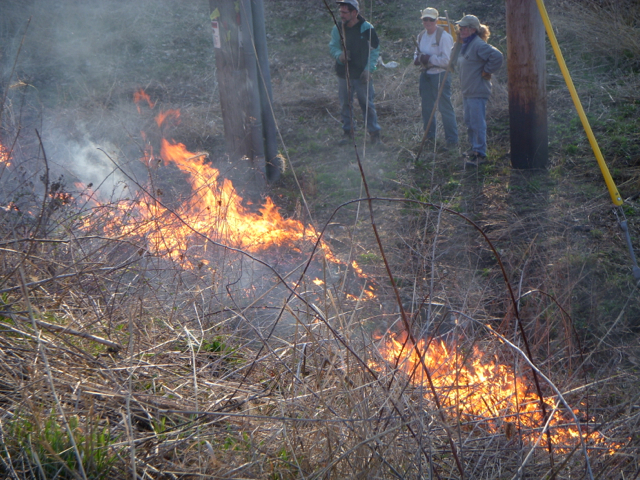 Part of the burn crew monitoring fire behavior on the south flank. Photo by Sandy Stark.

A backing burn moving down the slope of the Westmorland ravine prairie. Photo by Sandy Stark.

You Can Track the Changes

The SW Bike Path prairies are already “greening up” after the burns.  They will take on a different aspect each day as the prairie plants send up new shoots through the blackened surface.   As you use the SW Bike Path you can notice the changes between your trips on the bike path.